How do tears normally drain away from the surface of the eye?
Tears wash away debris from the eye and are drained away into the nose via two small drainage ports (or ‘puncta’) in the inner corner of the upper and lower eyelids. The puncta each lead to a short horizontal drainage canal (the canaliculus) which leads to a drainage sac deep under the skin at the inner corner of the eye (the lacrimal sac). Finally, this sac drains downwards (via the nasolacrimal duct – the tear duct), through the bone of the side of the nose into the nose. This is the reason why the nose runs when someone cries.

What happens when there is a narrowing of the tear ducts?
Any narrowing, irregularity, or obstruction of these drainage ducts may lead to a wet or watery eye, either in specific conditions (such as cold, windy weather), or on a more constant basis. Overflow tearing is referred to as “epiphora”. Frequently, a narrowing in the nasolacrimal duct may also lead to enlargement of the lacrimal sac. This may cause a build-up of mucus in the sac, which may either discharge back onto the eye (causing smeary vision, ‘gummy’ eyelids, or repeated eye infections), or it may result in an infection of the lacrimal sac itself (a condition referred to as dacrocystitis).

What is a dacryocystorhinostomy (DCR)?
A DCR operation essentially creates a bypass under the skin of the inner corner of the eye to allow the tears to drain more directly into the nose. A DCR thus creates a short-cut between the lacrimal sac (which lies under the skin in the very corner of the eyelids) and the nose, with a channel created in the bone to allow the connection between these two structures. Any blockage or narrowing of the nasolacrimal duct is completely bypassed with this surgery.

What happens when if I need surgery?
Initially a thorough review is required to determine the nature of the symptoms and to undertake an eye and tear drainage system examination. This is necessary because there are many different reasons for a watery eye which do not involve a blockage of the ducts, and these must all be excluded first. Subsequent tests include gentle syringing of a very small amount of sterile salty water through the tear ducts to identify any narrowing or blockages of the tear drainage passages. The severity of symptoms and the clinical findings determine the most appropriate treatment, which may not necessarily include surgery.
The success of lacrimal surgery depends on the severity and position of the blockage, and in no case can this be guaranteed. Nevertheless, surgery for patients troubled with significant mucus discharge, or gumminess of the eyelids, has a very high success rate (reduction of symptoms in at least 95% of individuals in the hands of most experienced oculoplastic surgeons). Among those with watering only, an operation carries a lower success rate (approximately 85%) even if surgery is successful in creating this channel. This is because (i) there may be subtle undetected causes for an overproduction of tears which the tear drainage channel cannot cope with, (ii) impairment of the natural ‘pumping’ mechanism of tears in the inner angle of the eyelids, and/or (iii) unusually viscous mucus in the tear channels or the nose.
Medications either containing, or being similar to, Aspirin, need to be stopped 2 weeks before surgery as long as a patient’s GP confirms that it is safe to do so. Anti-inflammatory medicines should be avoided for 2 weeks before surgery. If a patient has been prescribed these or any other blood-thinning drugs (such as Warfarin, Sinthrone or Clopidogrel), your GP, or Hospital Doctor will need to be contacted to determine if it is safe to discontinue these medications prior to surgery to reduce the risk of bruising and a post-operative nose bleed, which, although rare, can be severe. Paracetamol and Codeine do not affect bleeding and can be taken before and after this surgery.

What does the surgery involve?

What type of anaesthetic is necessary?
The operation takes about one hour and can be performed under a general anaesthetic (fully asleep) or under a local anaesthetic with intravenous sedation provided by an anaesthetist.
With a local anaesthetic, the nose and tissues around the inner corner of the eye are numbed with an injection, and although this will sting for a few seconds, there is unlikely to be any further discomfort. During surgery there is some noise and a feeling of ‘pressure’, as the fine bone lying around the sac is removed. Elderly patients, or those having a general anaesthetic in the evening, are advised to stay in hospital over-night. Otherwise, the patient is usually discharged from hospital on the same day, although travel home should be with an able-bodied friend or relative. Note, the patient should not drive home him- or herself.

What type of anaesthetic is necessary?
The operation takes about one hour and can be performed under a general anaesthetic (fully asleep) or under a local anaesthetic with intravenous sedation provided by an anaesthetist.
With a local anaesthetic, the nose and tissues around the inner corner of the eye are numbed with an injection, and although this will sting for a few seconds, there is unlikely to be any further discomfort. During surgery there is some noise and a feeling of ‘pressure’, as the fine bone lying around the sac is removed. Elderly patients, or those having a general anaesthetic in the evening, are advised to stay in hospital over-night. Otherwise, the patient is usually discharged from hospital on the same day, although travel home should be with an able-bodied friend or relative. Note, the patient should not drive home him- or herself.

What happens after surgery?
After surgery, to reduce the chance of a nose bleed, hot drinks are avoided for 48 hours, and there should be no nose blowing or strenuous exercise for 2 weeks. If sneezing is unavoidable, pressure should not be allowed to build up in the nose. It is advisable to sleep on an extra pillow or two for the first few nights, and driving (including operating heavy machinery), alcohol, and sedative drugs should all be avoided for at least 24 hours.
If the eye pad has not been removed in the hospital then it should be removed in the morning at home. Gentle washing is permissible, with care taken to avoid rubbing the eye. The wound should be kept dry and uncovered. Because surgery involves operating on some of the small sinus air spaces in the nose, swimming and flying in an aircraft should be avoided for least 2 weeks.
After surgery, a small nose bleed – or the passage of old clots – may sometimes occur. This usually settles after a few hours, and may be helped with application of an ice pack to the bridge of the nose and sitting forward. In the unlikely event that a nose bleed is severe or continues for over half an hour without showing signs of settling, medical advice should be sought immediately at your nearest Accident and Emergency Department, where nasal packing may be required.
Discomfort after surgery is usually readily controlled with paracetamol or codeine (not Aspirin or Ibuprofen, which increase the risk of bruising and nose bleeds). Many patients continue to have a watery eye for some weeks after surgery until the swelling and inflammation settles, and the silicone stent in the nose is removed. Although the skin incision heals over a few weeks, internal (unseen) swelling and healing may take many months to settle, and thus some occasional watering can persist for several months after surgery.

What are the main complications following a DCR?
Nose bleed:
A nose-bleed may occur in about 2% of patients within the first 10 days after surgery. In most cases the bleeding will stop spontaneously.
Swelling:
The degree of swelling over the inner corner of the eyelids after surgery can vary markedly, some reporting little or none, and others experiencing some swelling and bruising which takes up to a week to settle (the latter being unusual).
Scar:
The incision on the side of the nose (external DCR) typically settles very well, becoming visually insignificant in time in most patients. However, in about 1 – 2 % of patients, the linear scar is visually troubling, and may require local massage either with Vaseline ®, or Silicone gel (Dermatix or Kelocote) to soften it.
Infection:
Infection is a rare complication of surgery and is treated with antibiotics.
Internal healing with blockage (membrane formation):
Rarely, the normal healing reaction in the nose can lead to the formation of a fine membrane across the internal opening, with recurrence of the original watering symptoms. Over half of such patients respond to removal of the membrane and reinsertion of the silicone stent in the nose under local anaesthesia.
Further surgery:
In other patients (and especially if there has been previous trauma, or disease of the inner eyelids), the surgery described above is inadequate to allow tears to drain into the nose. In this situation, the only way to drain the tears is to insert a small, smooth, glass drain (known as a “Lester Jones tube”) through the inner corner of the eyelids to the nose (without any further skin incision) under a brief general anaesthetic. This tube remains permanently in place, although it can move slightly with blinking. This requires the daily instillation of Hypromellose drops twice a day followed by sniffing while occluding the opposite nostril.

What is the follow-up schedule?
The first review occurs 2 weeks after surgery, when the skin stitches (external DCR) are removed and the eye examined. At the second visit a month later the silicone stent is removed and no further routine review is necessary in most cases. 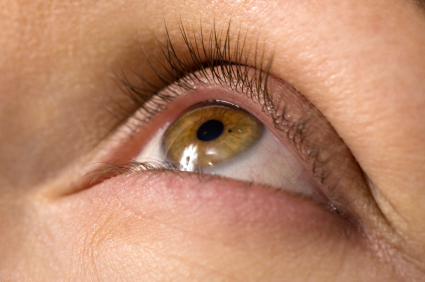